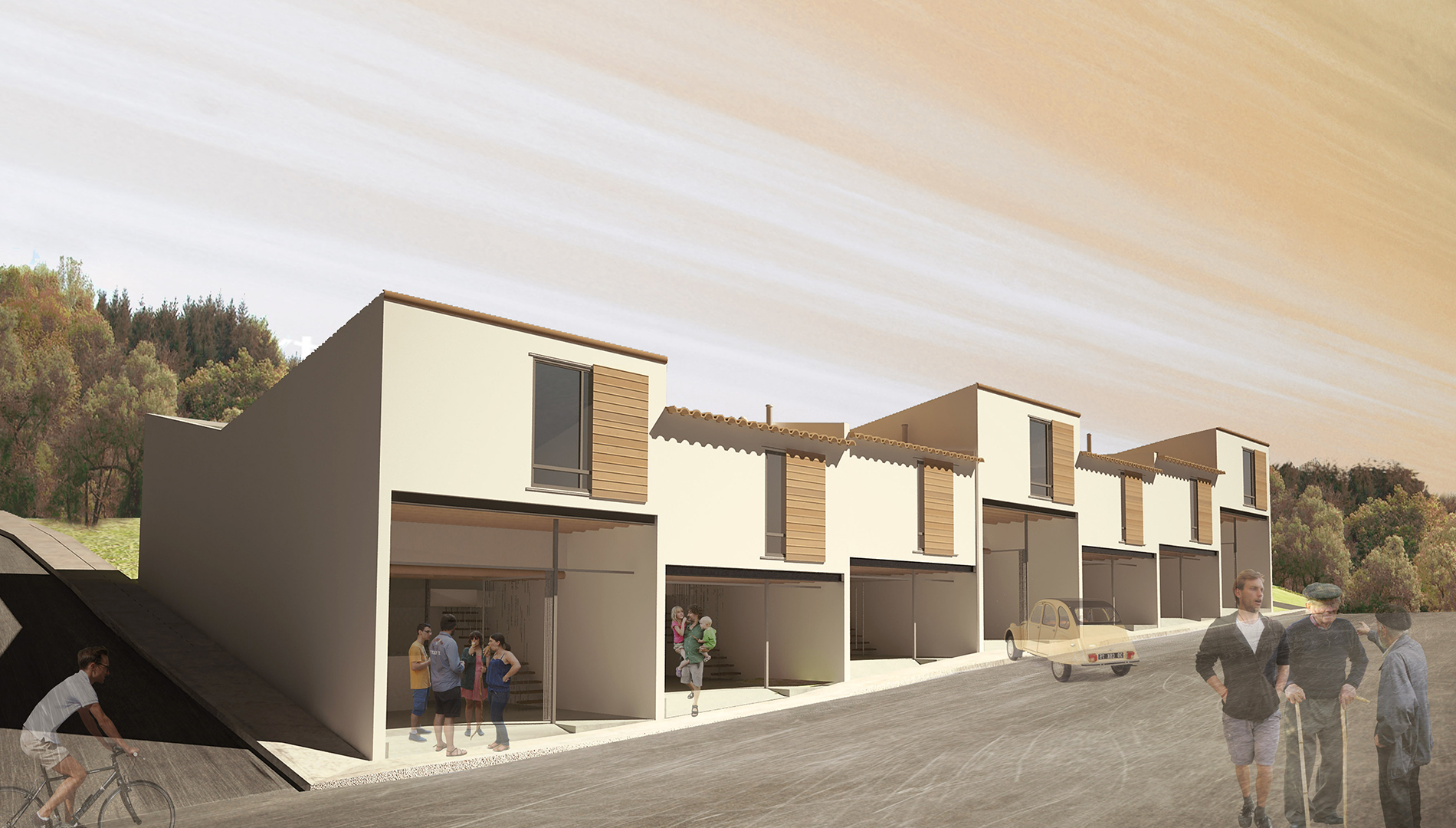 SINNEONTES*
*Philosophical neologism from the classical Greek «pneo», breathe, used to describe those who breathe the one another.

The VMEJÓ ideas competition asked for new models that would improve the quality of subsidized housing, involving three vectors of action: adaptability, self-construction and sustainability; to which we add a fourth point, the question of socialization. Faced with the scale of the challenge, we soon concluded that there would be much to be unlearned and we set out to start from scratch.

SOCIALIZING HOME_We start by imagining an inhabitant, the sinneonte,a common type, that has grown accustomed to current homes, but that does not resign itself to the prevailing individualization. If this proposal can contribute in something is in the reverssal of the centrifugal scheme imposed by current spatial segmentation. The last three centuries of domestic evolution can be told as a story of privatization, of a conquest of one’s own room; and its translation into housing legislation reflects in the institutionalization of the right to a private space. A model that shows evident signs of exhaustion. It is known that there is a clear relationship between spatial perception and the modulation of personality. This internal subdivision paves the way for decentralization and the co-isolated existence within the group of residents. Which, of course, has a direct translation into the way we define our social attitudes beyond the boundaries of the home. We propose a indoors reform to undo centuries of domestic fragmentation and move towards a sincere vertebration of the common. The home of the sinneonte is conceived as an incubator of socialization. Getting the self out of the locked room and confronting it with the immediate we is the first step towards a humanizing rebalance of the environment.

FLEXIBLE HOME_In the home of the sinneonte the commitment to flexibility is decisive. The maleability of the matrix prototype knows multiple expressions: both in spatial and functional planes, as well as in the plikas or inhabitable folds. The very choice of the construction system responds to the need to break with spatial rigidities. The domestic space is developed, depending on topography and contour conditions, on one or two floors, being the one on top where the elasticity of the scheme is best tested. Brick walls support 4 trays that are balanced according to the requirements of future inhabitants.
The open conception of domestic space pushes the functional versatility of the generating prototype. Non-segregation in rooms resists the over-specialization of the own room and points towards mobility of use over time. The home must know how to adapt to the interrelation, risks, expansions and troubles to which the biographical trajectories of the modern sinneonte is subject to. The plikas form the last level that in this generation of atmospheres refers to the small inhabiting of the folds in the home. Like in the unevenness that arises between platforms at different levels, that provides another layer of opportunity on the small scale. 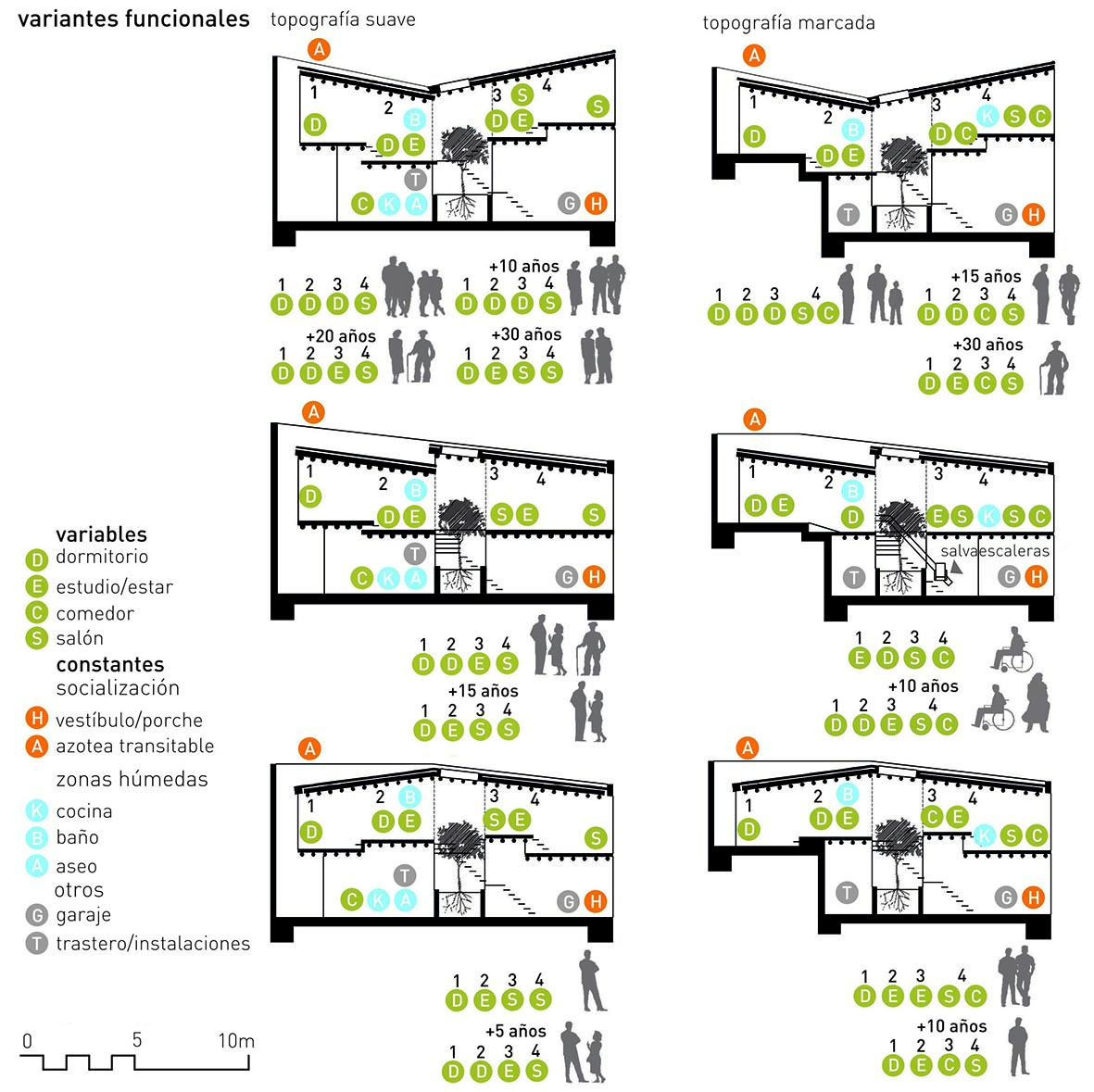 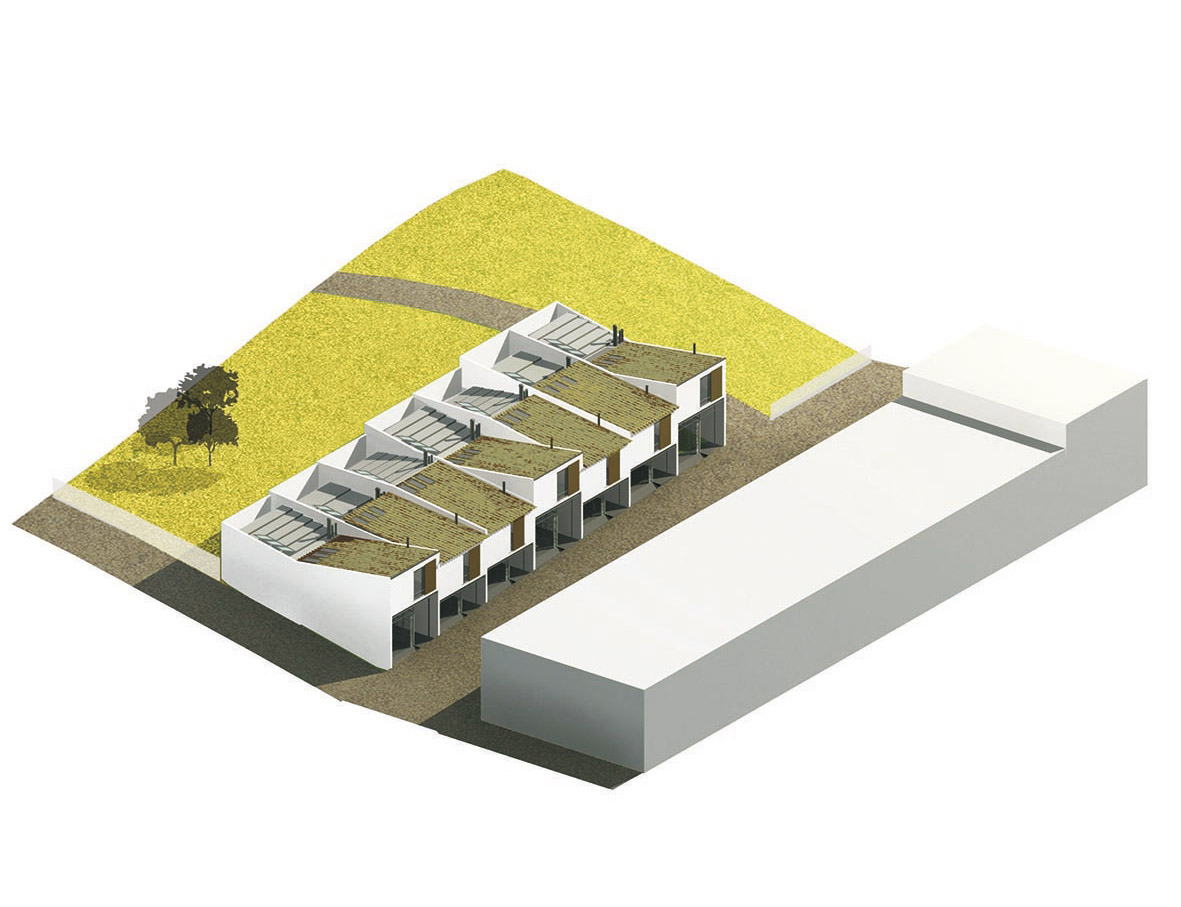 SUSTAINABLE HOME_Construction and consumption in the houses amount —depending on sources— up to 30 to 50% of greenhouse effect gas emissions. Design is decisive when it comes to reducing the ecological footprint of a building.
It is during the life of the building that the impact of right measures becomes more sensitive. In summer conditions we apply passive design techniques inspired by vernacular architecture. There are two strategies that can be alternated during day and night. During the hottest hours we avoid solar incidence by protecting vertical gaps, but using solar radiation to renovate and cool indoor air. Both the roofs and walls have a ventilated air chamber. In the case of the roof, air renewal occurs in combination with the solar chimney effect. Interior air is renewed by convection with fresh air coming from shaded areas and the interior garden. In less heaty hours the house allows easy natural cross ventilation. The interior garden will cool down by natural cooling and aromatize the rooms.
In winter conditions we propose an underfloor heating system heated by solar panels with a biomass boiler support. This system would be useful all year round since it is also used for hot water production. In addition, there is the option of incorporating a wood stove into the main room as an energy saving measure in more mild seasons. 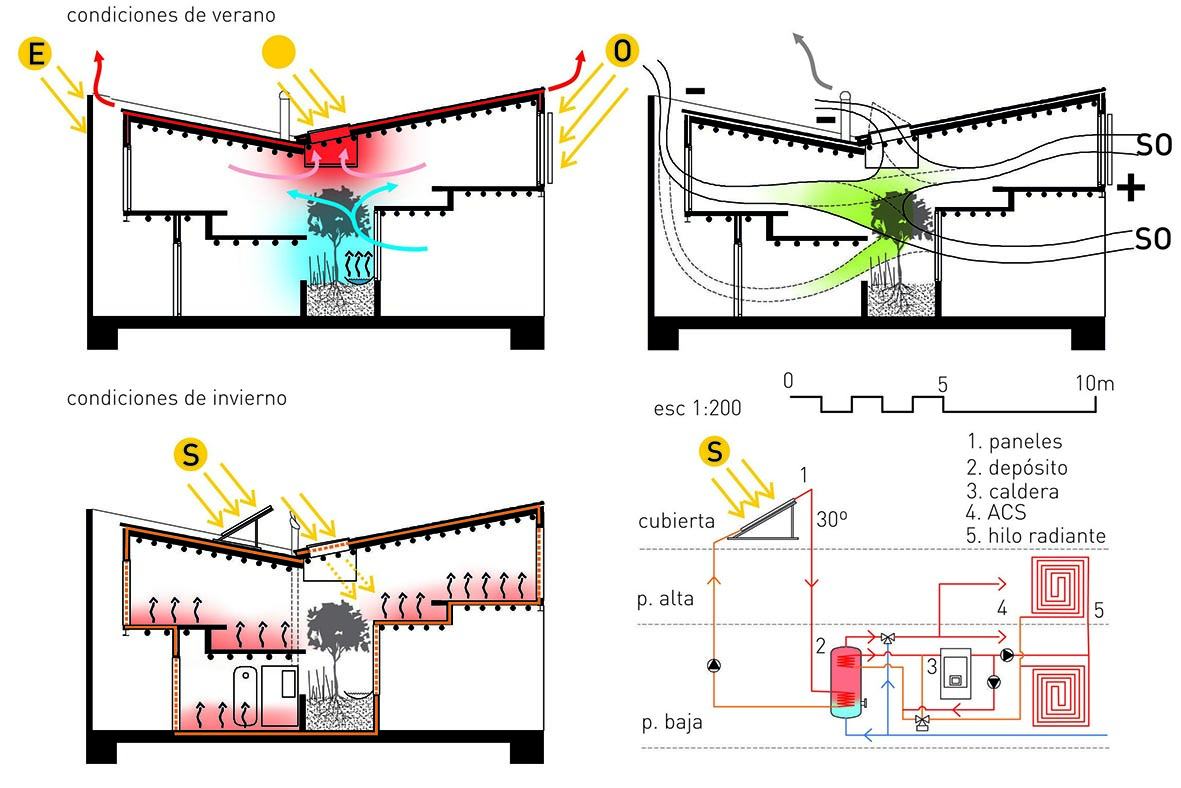 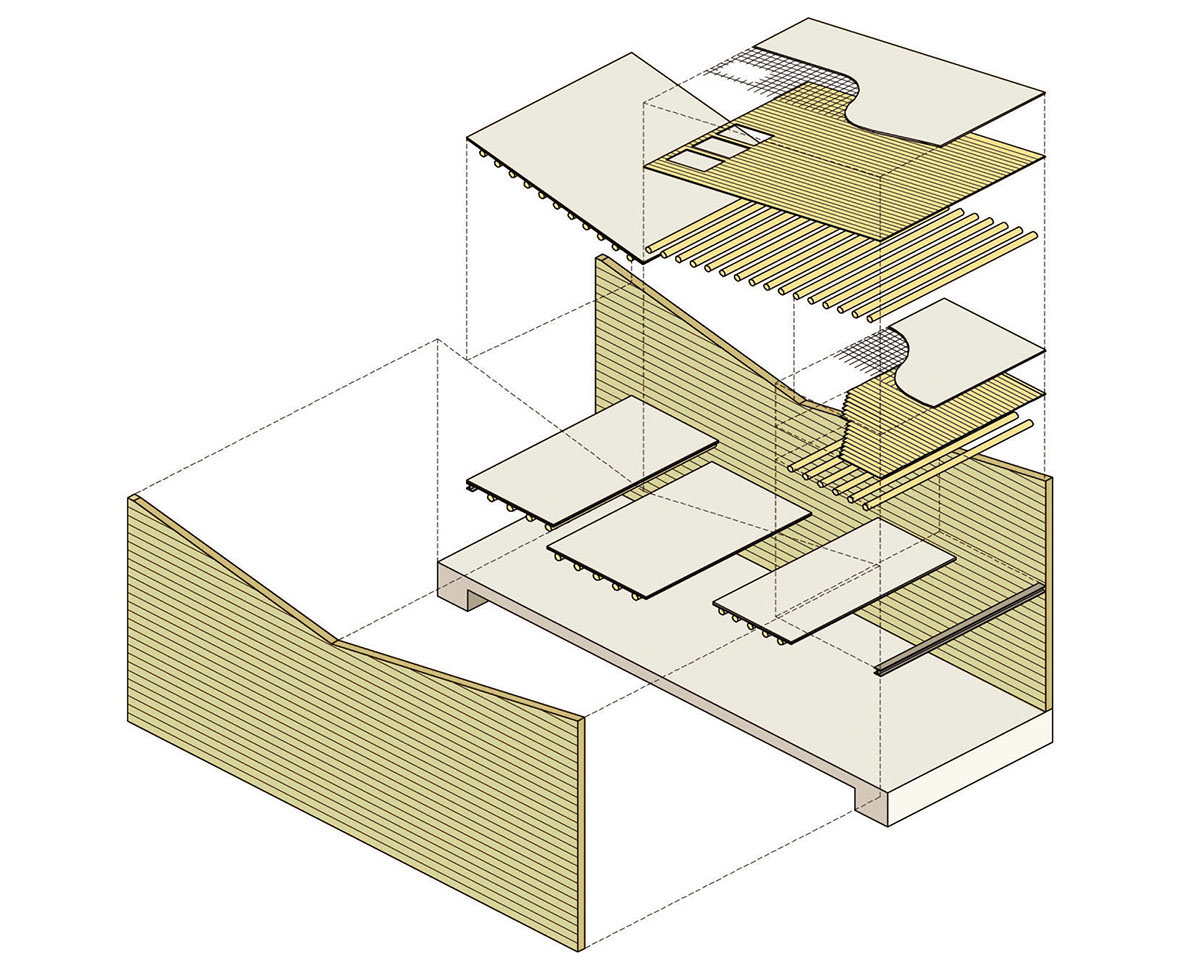 SELF-BUILD HOME_The construction model is inspired by the traditional bay and walls strcuture combined with wooden beams. This system not only provides a high spatial flexibility, it also stands out for the simplicity in its execution. Except for the foundation, this construction does not require special knowledge in masonry beyond the essentials. Moreover, the required workforce can be limited to as little as two operators during most of the structural work. Brick walls with interior armor do not require the formwork of reinforced concrete. Slabs consists of wooden beams and staves connected to a concrete layer. The system works as one piece, providing a stable structure. The low height of the houses acts in favor of the stability of the whole.
All of this adds value in terms of economic sustainability. We believe to have achieved a balance between vernacular inspired solutions and the most common current means of production. The result is a safe, adaptable and easy to learn system by the builder. Therefore the burden of third-party agents is reduced. The finishing system follows the same povera trend as the structural section. The aim is to reduce costs in non-essential items, in order to better use the budget in those items which provide an economic advantage over time, such as insulation, exterior carpentry and air conditioning installations.

APPLICABLE HOME_The application of the generating prototype to Prado del Rey, one of the three possible sites, involves adapting it to the slope of the Altozano, which imposes the main development scheme on a single upper floor. This determination allows for a wider facade front. This results in more spacious resting rooms, to the detriment of the living room, which is shared with the kitchen. Other conditions are specific to the inhabitants. The example developed here responds to the most demanding requirements in terms of sleeping areas. Corresponding, for example, to the case of a couple and two children. At the level of the folds the sinneontes of Prado del Rey wanted to adapt part of a sleeping area as an office and make a niche for rest in another of the plikas.
From the outside the first perception is that of a large lobby, a porticate hall that provides certain solemnity to the entrance of the house. At the bottom of the shaded entrance, which welcomes and tempers, the luminous presence of the interior garden stands out.
The stairwell, along with the garden, forms the functional hinge of the home. It gives access to the interior space, were the top of small tree receives us. The house is visible at a glance from the first moment, it is not partitions, corridors, locks or doors that modulate the perception of space, but the different heights of the platforms that are sequenced in relation of continuity. In plan the band scheme seeks the optimization of the space, grouping the wet and storage areas in the perimeter and centralizing the circulation area. As a result most of the surface is released for living areas.
Cantilevered stairs allow access to the walkable stepped roof. The roof adapts to various uses, be it barbecues, astronomy sessions, festive meetings, story-telling afternoons… The roof is valued here as the most important private expansion of the house, for its privileged relationship with nearby gardens. As it is not possible to open windows on the back at first floor level, we propose certain permeability through a discreet brick latticework. 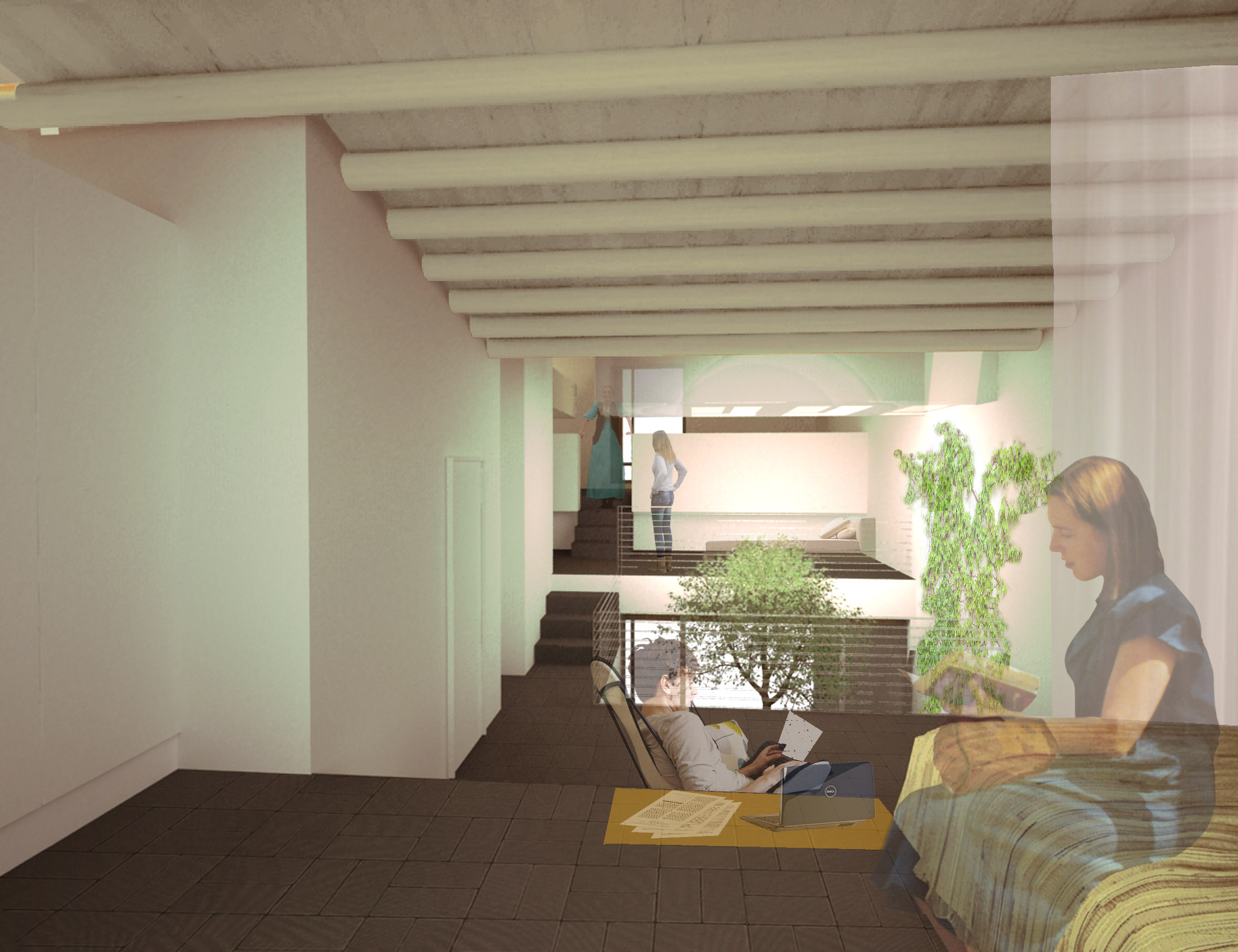 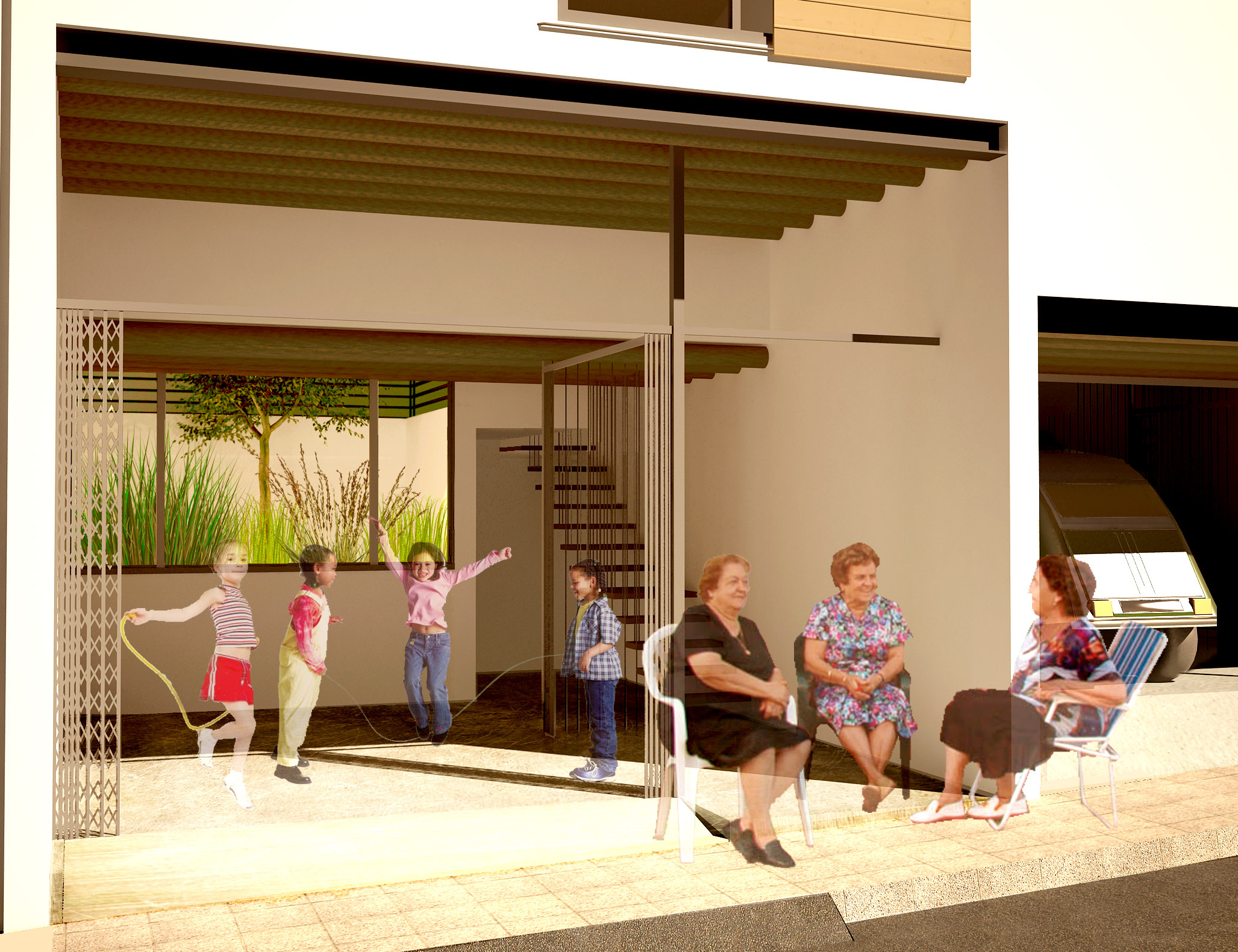