Dynamism in taking a leap in scale is a healthy exercise that stimulates creativity and traines in the overlapping of layers that model our spatial relationship. Few are the fortunate who have taken this conviction to its last consequences, and were able to materialize their work in the 7 orders of magnitude —from the milimeter to the kilometer— that comprise the creative spectrum of the architect. Others are allowed to caress at least the micro end of the range. Ochopiezas and Frigia arise from this exploration.

The Ochopiezas chair is named after the German Achtteile,its original name, as it was conceived and manufactured during a stay at the RWTH in Aachen. From its origin it was designed to give satisfaction to four starting assumptions: comfort, simplicity, elegance and easy execution. Ochopiezas is an object of everyday use, it is not a mere decorative element, it is designed with the user in mind, hence its lightness or the amplitude of the backrest and seat. It is also compact, low backrest and armrests, it can be practically circumscribed in a 60cm side cube. But the most remarkable thing, without a doubt, is the simplicity of the structural concept. In essence it consists of two closed circuits of steel tubes. The larger loop makes up the legs, part of the backrest and the seat, the smaller completes the first at the back. Both parts are composed of 4 flat pieces each, hence its original name Achtteile. Thus, its curved and lathed appearance is achieved from the deconstruction of the model in only 4 pairs of main pieces that were welded by their ends. Bars of smaller section are added to the main structure, generating the seat plane and providing lateral stability. As a result this is an object without stridency that, with its soft lines, adapts to very different ambiances.

Despite the distances in the execution and materiality of the object, the Frigia lamp shares very much with Ochopiezas. The lamp adopts the same concept of tubularity and exploits it to its last consequences, becoming tangled up over itself, to become a knot of Alexandrian resonances. Conceptual unity is also given here, manifested in the decisive commitment to a predominant material. From the simplicity of this limited palette —little more than yarn and carpenter’s glue— an element of intended complexity is obtained. We prefer to understand it as timeless, its references are not historical, we must look for them somewhere in between a zygote and a supernova. Its abstract conception enables it to transform any place into an evocative environment. Since the light obtained is diffuse, the lamp is suitable for different low-power bulbs and light intensity can be modulated it can be used as a main light source or a ornamental support element. 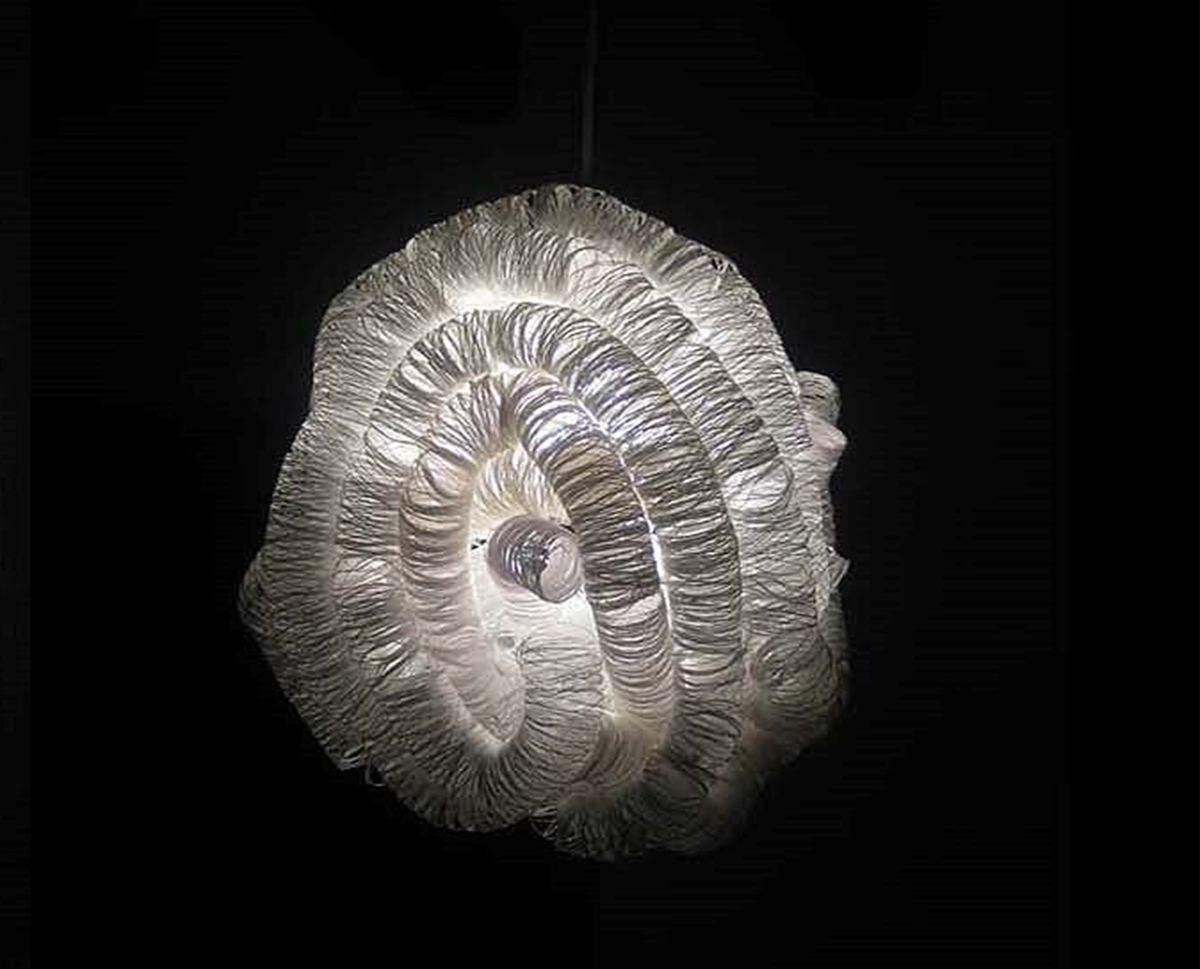